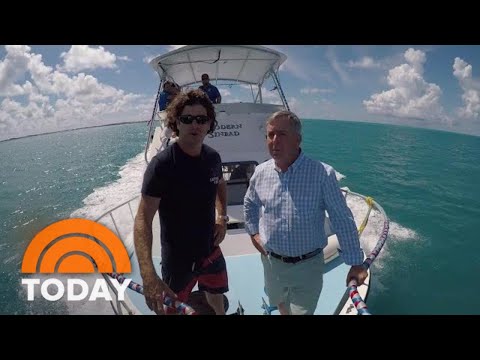 Vast, ominous, mythical, the Bermuda Triangle, also known as The Devil’s Triangle, is one of the greatest mysteries of our time. Popularized in Hollywood driving mystery stories like the five US Navy aircraft that vanished over the triangle in 1945.

We’re in the Bermuda Triangle. I head into the depths with scientist Dr. Phillip Bermudez custodian of historic shipwrecks. We’re headed out to the western area, You want to call it a mystery? There seem to be spots around where you get to three or four shipwrecks one on top of the other. Bermuda is an island settled by shipwreck survivors littered with over 300 sunken boats.  Why? Explanations abound from aliens and sea monsters to supernatural forces even the lost city of Atlantis!

Ruza has a more grounded theory. Marina is surrounded by a network of reef like stunning reef they come right to the surface and when ships encounter those they literally break them apart.  If you go back in time to your old wooden ships and stuff like that those ships had no chance.  Stories of those early wrecks fueled the mythology that followed using the terminology of today you would call the triangle well I mean you know this is the oldest fake news story in the world I mean like this this has been around for a long time and you know people build on so many theories yes researching them lonna Alexina exhibit designer for Bermudez ocean Discovery Center has delved into over a dozen of them it’s not a matter of how many things disappear it’s a matter of how they disappear scientists agree our oceans remain the true mystery dr.