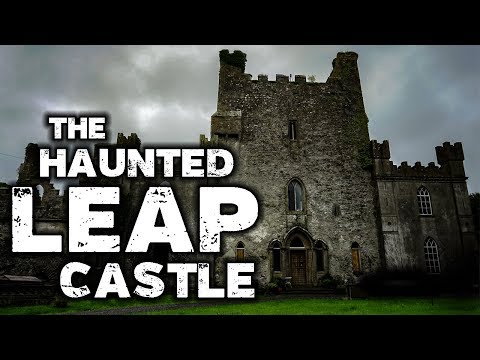 Whoa, that’s kind of scary. What the F*** was that? Hey guys. Thank you so much for tuning in to Amy’s Crypt. Today I am in Ireland. I’m here to check out one of the world’s most haunted castles. I’m so stoked to be here at Leap Castle, so let’s go check it out. Just rocked up to the front of the castle. I was just greeted by the cutest little dog and I don’t know where he’s run off to now, but this place looks amazing. So Leap Castle is quite old and has become so notorious because it has a long and very dark history. It was actually built in around 1250. Now just at the top of the building is a room known as the Bloody Chapel and that place really did earn its name. It was where one of the most gruesome murders within the castle occurred, which probably caused the earliest ghosts to haunt that castle. So the story goes in the Bloody Chapel there was a priest.

He was there with his family. His brother came in and drove a sword through his back fatally wounding him. He fell to the ground and took his last breath, bleeding out in front of his family. Now, that priest is said to still haunt the Bloody Chapel to this day. Many, many people passing by the castle have noted that top window in the Bloody Chapel coming alight at night and people think that that is the priest still hanging out in that room. Another creepy thing about the Bloody Chapel is that there was a Hidden Dungeon uncovered in the 1920s which was full of Human Bones. So just heading upstairs into what is known as the Bloody Chapel that is supposed to be one of the most haunted places of Leap Castle and wear a hidden dungeon was found.

Can you see? I’m gonna keep going further up this dark staircase with the hole through the floor. Seems safe. It’s kind of scary. It’s so dark when you turn that light off. I think that torch is dying. Yea, that will be right. I cam currently in what is known as the Bloody Chapel. It has very good reason to be named that. It is supposed to be haunted by a priest who was murdered here. I’m gonna have a look around there. There is supposedly a dungeon here which is just a drop and the story of that is they would just drop the people down there and they would be impaled on spikes that lay at the bottom of it.

And that was actually covered up and it was revealed or found again in the 1920s. And there was that many human bones that they found in there that they extracted three cartloads out of the dungeon. So, very, very, interesting and spooky. I’m just walking down a staircase out of the chapel now and I don’t know if this goes to the dungeon. There is a big hole down here. I’m really more concerned about this thing that looks like a bird nest right next to me. I am extremely scared of birds, so, can maybe deal with a dungeon but if a bird flies in here for its egg or something.. Okay so this is the hole. Yeah that is deep. That’s deep. Okay. that’s quite deep – I don’t know if you can see as far down on my camera as I can see. That hole is deep. I don’t know if that’s the dungeon there’s a door here and then through that it’s just kind of like ruined bits of the castle.

Let’s go back up these stairs now. I love your choice of footwear today Jarrad. There’s definitely birds up here because I can hear them. There is another drop over here. That’s what I was just down that staircase. If I come over here. Okay there’s another drop down here. This one doesn’t look as deep but you’d still get pretty hurt if you fell down there and there were spikes at the bottom. So that’s creepy. There’s no window here so, I dunno, it is a pretty big drop. I am not like too scared of heights though.

So yeah, that is super cool. Yeah, the Bloody Chapel. Should we do a Spirit Box cause we have it to ourselves for a bit. This is a Spirit Box Session inside the Bloody Chapel of Leap Castle. Hi my name is Amy, is there anybody in this chapel that wants to talk to me? Could you come close and tell me your name? Is there a priest in here? How did you die? Okay, that’s a dog barking, I hope. Were you killed in the dungeon here? What is your connection to the Bloody Chapel? Why are you still at Leap Castle? Can you come close and say anything to me? What is your name? How many people died? We don’t seem to be getting much through on the Spirit Box so we might continue having a look around the castle. Of the more gruesome murders to happen here at Leap Castle was actually the murders of about forty men. Basically these men were invited by Leap Castle by the owners after they had helped out in a victory against another rival clan.

Yet, they did not know that the owners had poisoned all of their food so those forty men died during the feast here at Leap Castle and it has thought that all of their souls still haunt the castle to this day. So another one of the cool stories from Leap Castle that involves a little bit of legend and of course more murder dates back to the 1600s. So around this time the owner actually hid a large amount of treasure somewhere in the castle or its grounds. He then had the two servants that assisted him murdered so that they couldn’t tell anyone where the treasure was. He later was imprisoned for treason, went a little bit insane and then when he was released from prison, couldn’t remember where he hid the treasure – so there very well may be some riches still hidden in this area. Let’s go look down here… Just wood – it is not the hidden treasure.

This is really, really amazing. There is lot of cobwebs everywhere that adds to the feel but then all of the paintings, the furniture, everything – it’s just unreal. Like this heart. I love it. This is cool. There is like a secret room in here. I don’t think we can go in there, but… Hi guys I’m in a different room of Leap Castle that is much quieter. I’m gonna try an EVP session in here and see if we can pick up on any voices in this recording that aren’t mine. Hellow my name is Amy. Are there any spirits around me in this castle that wish to talk? Could you come close and say something to me? Alright, nothing obvious picked up there.

Can always listen back to it later. There is another spirit that haunts Leap Castle. It is known as an Elemental Spirit which is basically a very primitive ghost that is described as being insanely scary. There has been stories and retellings of encounters with this spirit for hundreds of years. Thankfully for the current owner who I just spoke to he said that he hasn’t encountered the elemental spirit at all during his time here at Leap Castle. He also doesn’t want to so hopefully it stays that way. So the owner here at Leap Castle is a really really lovely chap. He is working hard to restore the castle but there’s a lot of work to be done like you can see the area that I am in now is quite ruined.

Oh here’s my little dog friend! Hello! Hello buddy! So this guy is actually a stray that just hangs around the valley and like goes to all the different houses supposedly. He has no name but everyone loves him and he’s so friendly and they all just kind of pitch in and look after him. But as I was saying yeah this part of the castle was quite ruined. Thank you guys so much for watching. I hope that you enjoyed exploring the awesome and very haunted Leap Castle in Ireland here with me. If you did please remember to Like, Comment and Subscribe. If you’re looking for a little bit more reading on haunted places head to AmysCrypt.com but remember until next time, stay spooky. .